Jonathan Hickman is best known for his writing and glyph making skills, but it looks he would also make a pretty good editor. Hickman took to Twitter to reveal that there was a typo in this week’s House of X #2… but if you don’t want to see spoilers for the issue, well too bad, because Rich Johnston spoiled them in a headline earlier today. If you somehow managed to avoid that though, click away now instead of scrolling below. On the other hand, if you want tons of spoilers, click here. 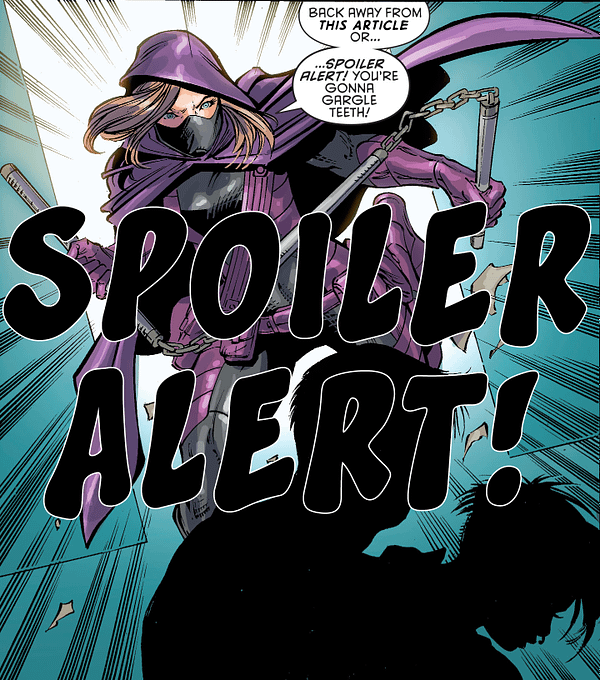 Okay. So the basic concept behind House of X #2 is that Moira MacTaggert is a mutant whose power is to go back to the start of her life every time she dies with all the knowledge of her past lives. And the current Marvel Universe, the one we’re familiar with from past X-Men comics, is Moira’s tenth life. And also, she faked her own death and is still alive.

But there might have been a little confusion about that because there was an issue with the timeline as presented in the book, and that’s what Hickman took to Twitter to correct.

But how about that @PepeLarraz and @martegracia? No errors there. Just perfect, perfect comics.

So the Genoshan genocide did take place *after* Moira faked her own death. That settles that. So what about the other typos?

A fan pointed out one:

And another pointed out another one:

And another one? Wait, we thought there were only three!

Of course, as Hickman mentions, this isn’t the first of his X-Men comics to have typos. In fact, every issue so far has had them. Powers of X #1 had two typos, according to Hickman…

Are you guys having fun?

Because I’m having so much fun. So much fun that this issue came with not one, but two, bonus typos.

See if you can find them!

Thanks for all the chatter about the book. The response is solid, and it looks like we’ll be doing a third printing next week. Glad everyone is having fun.

Oh, and this was an error. The ‘H’ and ‘G’ are switched. I screwed up. pic.twitter.com/WfwqzXXqsG

At this point, Hickman probably just should have pretended he made the typos on purpose, and the comics community would have probably gone along with it, praising said typos as genius storytelling. That’s certainly what we’re going to do the next time someone complains about typos in our articles. “Bleeding Cool is just the House of X of comics journalism.”

In any case, though a startling number of typos have made it through the editorial process so far, that doesn’t mean Marvel’s editors aren’t doing their jobs. Their jobs are to tweet a lot, right? They certainly do plenty of that.

We look forward to the next groundbreaking, revolutionary typos Hickman comes up with for next week’s Powers of X #2, typos which will surely change the X-Men universe forever.

A prophecy says that in the comic book industry’s darkest days, a hero will come to lead the people through a plague of overpriced floppies, incentive variant covers, #1 issue reboots, and super-mega-crossover events.

Scourge of Rich Johnston, maker of puns, and seeker of the Snyder Cut, Jude Terror, sadly, is not the hero comics needs right now… but he’s the one the industry deserves.